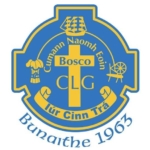 The U17s recorded a fine victory against Saval but were made to work all the way by the visitors. These two teams have battled it out over a number of years with Saval league winners and Bosco championship winners at U14 in 2014 so the encounter was eagerly anticipated
Bosco started well in the first half and the deployment of Eden Casey at full-forward created a number of scoring opportunities which allowed Bosco to open up a 9 point gap. Saval, playing against the breeze, struggled to get into the game but remained in contention due to a number of bad misses by the Bosco forward line.
With only minutes left in the 1st half Bosco seemed to be comfortable but Saval created an excellent attacking move and finished to the net to lift their confidence at half time.

In the 2nd period Saval began to play to their full potential and several unanswered points reduced the arrears to 6 points. Indeed they could well have been level had it not been for some outstanding goalkeeping from Down Minor Keeper Roisin Kelly.
Bosco easied the pressure with an excellent goal from Eden Casey( her 4th in the game) and an excellent goal from Aiofe Magee diving in ahead of the advancing Saval Keeper to finish to the net.

At full back Nicole Cunningham played with great composure under the high ball and Aine McCabe, Aoibheann Quinn and Nicola Downey were a constant threat.